In case you missed it, you can watch our whole conversation here:

Roya Fahmy works as the Senior Director of the Project for Enhanced Global Understanding at Wyoming Seminary College Preparatory School in Kingston, Pa. The project brings together Israeli and Palestinian teens to incorporate social justice into their lives, gain conflict transformation skills and train as future global leaders. She serves as a social/emotional and diversity counselor for the whole school community.

She is also a licensed psychotherapist who specializes in youth and families of global cultures and world religions. Roya also spent 7 years in academia teaching graduate social work and cross-cultural competence at the Temple University Graduate School of Social Work as well as Misericordia University in PA.

She graduated from Wilkes University in PA with a bachelor's degree in communications and earned a self-designed master's degree in global social work from the University of Maryland at Baltimore.

In response to the 9/11 crisis, Fahmy founded Visions of Tolerance, an international consulting organization in 2002, to promote conflict resolution and multicultural understanding amongst youth from warring areas of the world. Visions has consulted with the White House, the U.S. Department of State, Seeds of Peace International, the Ministries of Education of Israel and the Arab world, and churches, synagogues, mosques and houses of worship throughout the world.

Roya lives in PA with her family; she is extremely proud of her daughter, a Boren Scholarship winner and college junior majoring in marine biology and Japanese studies. Roya’s fun includes international and domestic travel, reading books and plays, theater, swimming, paddle boarding and hiking. She uses mindfulness, meditation, and yoga to ground, focus and prepare herself for her life and work.

She recently assisted her 89-year-old mother in writing and publishing her autobiography which focuses on a young woman and her immigration experience to the U.S. Roya is also a theater artist and she writes, directs and acts in social justice theater.

Roya is available to counsel and coach around challenges and issues of living in a monolithic society and having a pluralistic, multicultural identity.

Further resources mentioned in our conversation:

1. Visions of Tolerance is in the process of transforming its name, logo and website. Roya's new organization will be called Cross Cultural Consultants. Stay tuned for further details to come.

2. Seeds of Peace, a leadership development organization committed to transforming legacies of conflict into courage to lead change

4. Ruth King, author of the book Mindful of Race

5. What is white fragility?

A term coined by Sociologist Robin DiAngelo, who describes the phenomenon as the following.

"White people in North America live in a social environment that protects and insulates them from race-based stress. This insulated environment of racial protection builds white expectations for racial comfort while at the same time lowering the ability to tolerate racial stress, leading to what I refer to as White Fragility. White Fragility is a state in which even a minimum amount of racial stress becomes intolerable, triggering a range of defensive moves. These moves include the outward display of emotions such as anger, fear, and guilt, and behaviors such as argumentation, silence, and leaving the stress-inducing situation. These behaviors, in turn, function to reinstate white racial equilibrium.

Discomfort and defensiveness on the part of a white person when confronted by information about racial inequality and injustice. "her indignant reaction comes off as the quintessential combination of white fragility and white privilege"

6.   Patricia Roman McGraw's books: It's Not Your Fault and Wisdom of the Heart

In 1852, one of the Báb's persecuted followers had a revelation in prison that he was the prophet that the Báb had proclaimed. He called himself Bahá'u'lláh, meaning The Glory of God.

Bahá'u'lláh was the founder of the Bahá'í faith. His life as a prophet was spent in a series of exiles that culminated in Acre, where he wrote the Kitab-i-Aqdas, one of the key Bahá'í scriptures, as well as other spiritual works and letters. He died in 1892..

Thanks so much for joining us, Roya! It was a joy to learn from you. 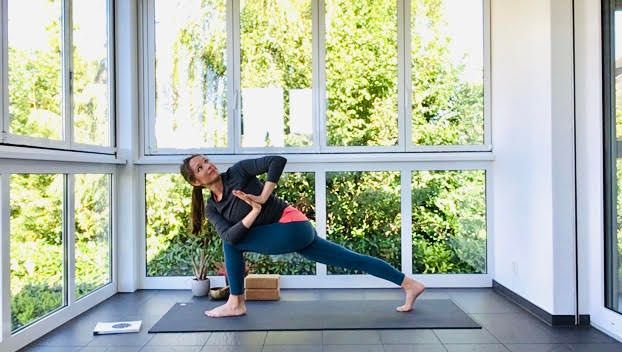 This vigorous all-levels flow will wake you up and wring you out. In a good way.

These five simple micropractices have the power to shift your workday from miserable to mindful.