1. Who: Jennifer Ciarimboli, studio BE Founder and CEO

2. How long have you been meditating?

I’ve been dabbling in different meditation techniques and practices for 20 years.

3. What made you start a mindfulness practice?

I didn’t actually know I was “starting” a mindfulness meditation practice; it just happened via my longtime yin yoga practice. At some point I realized that things were shifting for me (in a big way). In 2014, I enrolled in the Insight Yoga Institute with my primary teachers, Sarah & Ty Powers, and that’s when I first heard the Dharma and learned more about mind training, so I guess that’s when it all clicked for me. From that point on, I’ve been practicing consistently.

4. What was your life like before having a regular meditation practice?

Pretty chaotic. I grew up in a broken home with massive dysfunction and trauma, layered in fear and guilt. My nervous system was fried at a really young age, and because life was so unpredictable, I didn’t feel safe unless the bottom was falling out. So there was a lot of drama. Unhealthy patterns were there along with a general distrust of anyone (including myself). I didn’t know any of this, though, until I got to the other side.

5. What's different in your life after?

This is a hard question…because my practice has changed everything. Things are different certainly, but all of the stuff is still there, it just doesn’t own me anymore — which is not to say that I don’t sometimes catch myself falling into some of those old patterns. The only way I can describe the main difference I notice is that I trust myself now. I trust deeply that I have the capacity to remain steady no matter what life throws at me.  I feel safe even though the world sometimes doesn’t.

6. Why did you create studio BE?

So many reasons. But primarily out of a deep longing for these practices to be more accessible to the average person. After owning a yoga studio for six years, I became extremely disenchanted by the yoga “industry” — which is not to say that there are not amazing people out there teaching and working VERY hard for all of the right reasons. It’s just a very tough business, wherein it’s very hard to reach and consistently serve populations that need it most. Single moms, first responders, veterans, teachers, social workers, the average American worker; they just can’t afford to drop into a yoga studio. It’s not the studio owners' fault; it’s hard to just keep the doors open.

With my corporate background, an explosion of scientific studies on meditation, and the trend of big corporations embracing mindfulness as a way to enhance other skillsets, I saw an opportunity and knew deeply that I could bring studio BE into the world with authenticity and heart.   I felt that if I could prove the value of the practices in businesses by not only providing mindfulness to leadership within the organizations, but also to the folks on the front line — think customer service reps, call center employees, and the like — going wide and deep within the organizations and teaching these simple, yet transformative practices, we would not only cultivate a real business opportunity, but more importantly, we could convince the C-Suite decision-makers to invest in community programs to reach underserved populations that need it.

In the long term, that means working together to provide a sustainable system to make yoga and meditation more accessible to everyone. My hope is that through our studio and non-profit partnerships that we can provide scholarships and sponsorships, placing teachers in paid roles within the communities that they serve.

The benefits of the practice can truly ripple out from there.

7. Who are three of your favorite teachers, and why?

Sarah Powers: When Sarah walks into a room, the energy of the space is transformed. She OWNS it; her strength is palpable. Sarah is brilliant and kind, and she challenges me to dig deeper. The first time I met her, I knew she would be my lifelong teacher. I’ve never been in Sarah’s presence when I wasn’t completely present, hanging on every word — like a sponge, just soaking it all in.

Ty Powers: Ty is so generous with his teachings and has kind, welcoming eyes that make you feel seen and safe. I’ve learned so much from him, just through observation and listening, and being guided into very deep experiences. I cherish that deep sense of feeling supported and knowing that I can just show up fully exposed, raw and real without any judgment. It’s freeing, and provides a solid ground of trust in which to grow.

Biff Mithoefer: I spent five years with Biff, assisting in his trainings and having the opportunity to learn from him. Biff is a really unique teacher blending wisdom traditions from the Dharma, Taoism, Yin Yoga, indigenous people, Sufi poetry, the work of Angelis Arrien, and more. I sat in circles with Biff, hearing the same stories again and again — and learned something new every single time. My time with him was full of deep integration, healing and growth. His support and guidance were extremely impactful and helped me get very clear on who I am as a teacher and a healer in the world.

I really love what they are doing over at 10% Happier. Dan Harris is SO good at making mindfulness accessible to us "fidgety skeptics" (brilliant!). He pulls the mysticism out while somehow keeping it in, and I love that. Because there IS an element of magic and wonder in the practices, but it can turn people off. So talking about that aspect can be tricky! And they do it so well. I’ve read a lot of books on mindfulness, which I treasure.

Some of my favorites include:

The Wise Heart, by Jack Kornfield
Boundless Heart, by Christina Feldman
Dipa Ma: The Life & Legacy of a Buddhist Master
Things That Join the Sea & Sky, by Mark Nepo

9. One moment of your life when your mindfulness practice was especially helpful:

My grandmother’s death. I was very close to her; she was my beloved. She was hiking through a pumpkin patch with us one day, and a few days later we were in the hospital. Truly a lesson on the nature of impermanence. It was a painfully slow decline from there. She was in and out of awareness, in the hospital, then rehab facility and then home with hospice care over a three-month period. At one point, in the midst of feeling so desperate for my practice, but also struggling with pulling myself away for that more “formal sit," I realized that my practice was right there. Being with her in full presence; opening to her just as she was in any given moment. Studying her hands and feet and her smile and smell, knowing the preciousness of those moments and embracing each moment as it came. I was never more present in my entire life. SHE became my practice, and I realized that all of those hours sitting in silence prepare us for life, to embrace the truth of impermanence in all of itss rawness and beauty and suffering. My grandmother died on Christmas Eve. I miss her, but I can drop back into my heart in any given moment and she is right here.

10. Best advice for a meditation newbie:

B. Getting to know and trust your inner landscape is fascinating. Becoming your own inner scientist is transformative. Making space and welcoming in all of your parts with compassion and kindness really does change everything.

C. Mindfulness meditation doesn’t stop stress, but it completely changes the way we meet stress, and our relationship to it.  Stress doesn’t have to own you. 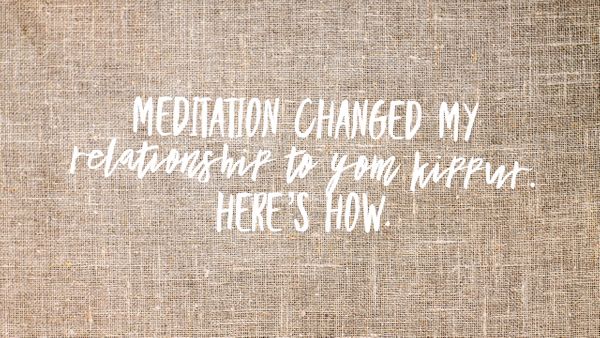 The prospect of 25 hours of spiritual fasting, introspection and prayer used to exhaust me. Since becoming a meditator, Yom Kippur feels like a total gift.

Heartbreak is a part of being human. We've all been there. Mindfulness can help turn our deepest moments of suffering into empathy and compassion. Try this simple Tonglen practice from Pema Chodron the next time someone you love is having a hard time.